The Clark County Sheriff’s Office has a contract with Bethel Township to have one deputy assigned to ensure a vigilant presence within the township. 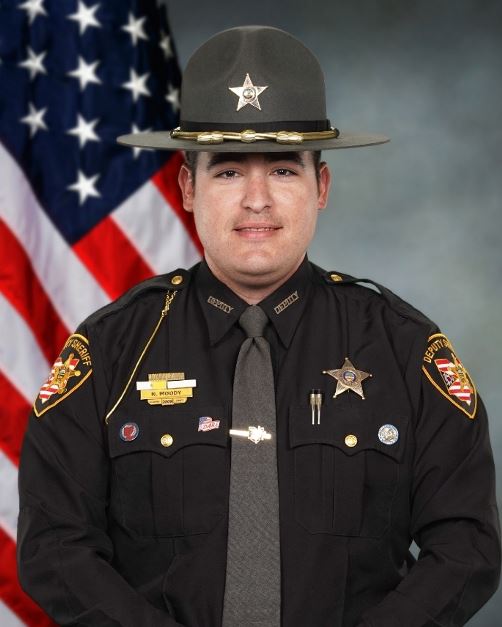 Deputy Moody attended Kenton Ridge High School and Clark County Joint Vocational School. He completed his Ohio Peace Officer Basic Training at Clark State Community College in 2008. Deputy Moody was hired with the Sheriff’s Office in March 2008 as a Cadet in the Uniform Patrol Division. Deputy Moody was sworn in as Reserve Deputy in 2009 and was also hired as a full-time dispatcher that same year. He was hired as a full time deputy in 2011 and was assigned to the jail division. During his time in the jail division, Deputy Moody received an award for meritorious service and perfect attendance.

In October 2014, Deputy Moody was assigned to the road patrol in Moorefield Township where he worked in a community policing role. After transferring from this position to the Road Patrol division, he completed Critical Incident Training and became CIT certified in 2016. Deputy Moody completed basic and intermediate crash investigation through the Ohio State Highway Patrol Training Academy in 2017. He recorded the most criminal arrests in the Sheriff’s Office during 2018.

Deputy Moody has served as a Field Training Officer in the Jail and Road Patrol divisions. In this role, he has trained many new deputies at the Sheriff’s Office.
In 2020 Deputy Moody transferred to Bethel Twp. contract deputy position where he is currently assigned.  He enjoys community policing and getting to know the citizens and business owners in his area.

If you have any community concerns or tips you wish to share with Deputy Moody, you may email him here.